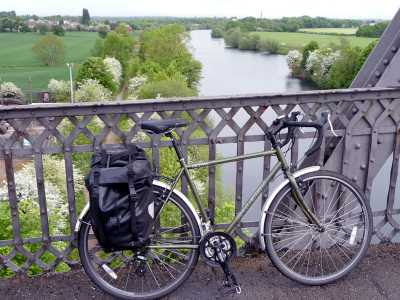 Another very early start, hacking out into the Lancashire road system at a drizzly half seven. But with a big tailwind, firmly track-pumped tyres, and all my camping gear left at Si and Sue’s for shipment home and hence half-weight luggage, it felt like the bike was pedalling itself. Maybe I just hadn’t woken up yet.

I slid over the toll bridge crossing the Manchester Ship Canal – a surprisingly uncrossable waterway – en route to meeting up with my brother John at Chinley in the afternoon. 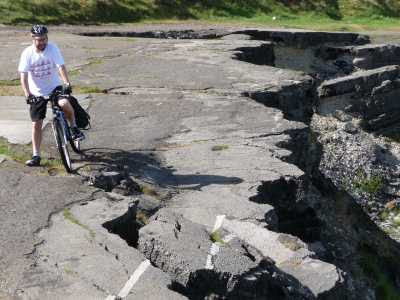 That’s John, negotiating the bizarre collapsed old A625 road that used to go over Mam Tor. After constant landslips, the roadbuilders abandoned it to the elements in the late 1970s. It now looks strangely like an earthquake zone in Chile or a Road of Death in Bolivia, instead of a Peak District path near Castleton’s tea shops.