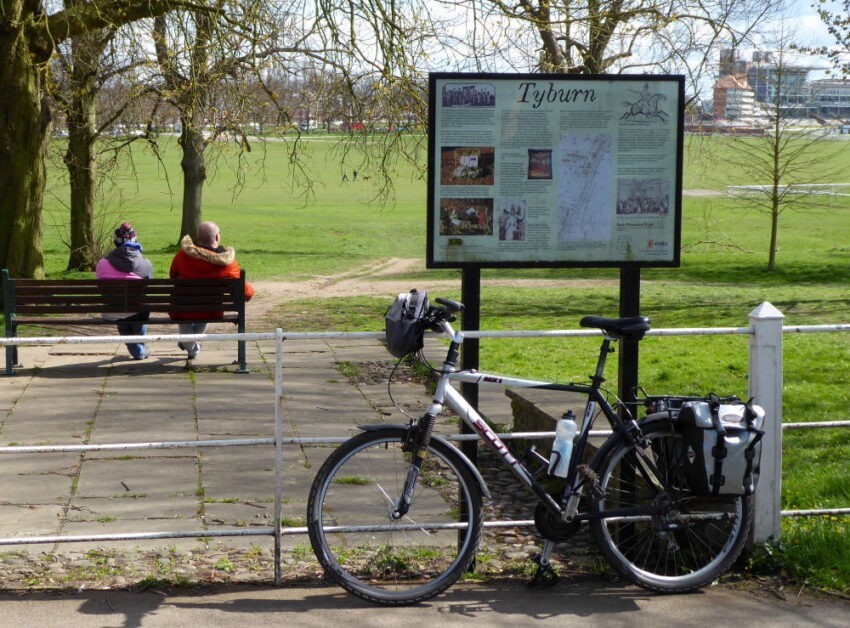 London to York in a day? Tough, but within the scope of many a decent endurance cyclist. It’s 200 miles, in midsummer you have 18 hours of daylight. For an informed opinion, in other words not mine, on this as a cycle challenge, skip to the bottom of this page. But first…

London to York in a day is famous for a ride of a different kind to one of two wheels. At least, according to legend. Some time in the late 1600s, a highwayman known as Swift Nick committed a robbery in London around 4.30am. (One version puts this at Gad’s Hill, Kent; another, more plausibly, at Barnet.)

Nick and his horse galloped through the day to York – a remarkable feat – arriving around 8pm to check into a hotel, and inveigle himself into making a bet with the mayor of York (who was playing bowls) to ensure his arrival was remembered authoritatively.

When he was eventually identified and charged with the robbery, he had the perfect alibi: it was clearly impossible for anyone to have been in London and York on the same day.

Who was the highwayman, though? The trip was spuriously attributed to Dick Turpin (1705–1739) in the 19th-century novel Rookwood, but it certainly wasn’t him. Another highwayman, John (or William) Nevinson (or Nevison) (1639–1684), is often credited as the rider, but that’s not totally convincing either.

I didn’t have time to cycle from London. But as it happens, both Nevinson and Turpin were tried, hanged and buried in York, after other crimes caught up with them – so I did have time to nose around their haunts. (An appropriate word: Turpin’s spirit is said to frequent his purported grave, while Nevinson’s ghost was reported too – see Overtown.org.uk for more info about Swift Nick’s journey).

Swift Nick would have arrived in York at Micklegate Bar, where all travellers from the south entered the Walled City. Which hotel he checked into is a mystery, though for speed it may well have been on Micklegate itself.

Where was the mayor playing bowls? I imagine somewhere on the Minster’s lawns – a short walk for Swift Nick, after his wash and brush up and change into smart clothes to reinforce his alibi.

Nevinson and Turpin were both executed at Tyburn, York’s popular entertainment venue of the period. From 1379 to 1801, you brought family and friends here for a good day out, watching criminals die slowly in agony by hanging, at the hands of the state.

If you were lucky they’d have their insides ripped out and their limbs chopped off, perhaps with highlights in that evening’s broadsheets, and commentary and analysis by pundits.

Nowadays the area is better known as Knavesmire, the home of York Racecourse. The only people who make a killing now are the bookies.

The exact location of Turpin’s grave is unknown. He was tipped into the ground somewhere outside St George’s church, in George St; there’s a stone commemorating him in amongst some graves opposite the church, but the surrounding graves are all 19th-century, well after Dick, and the stone itself is evidently 20th century.

Nevinson’s last known activity was being lobbed into an unmarked hole in the churchyard of St Mary’s, on Castlegate. The church was deconsecrated in the late 1950s and is now an arts venue, while the churchyard is now Coppergate Shopping Centre.

My best guess is that Nevinson is somewhere underneath Primark, though it would be amusing if he were below the Body Shop.

Those highwaymen seemed to spend a lot of their time and ill-gotten gains in pubs, if their Wikipedia entries are anything to go by. So let’s finish with a couple of York’s finest. The Last Drop Inn on Colliergate (bottle shop? pub? in these times it’s hard to know) is, as its grimly punning name and vivid sign suggests, inspired by all those Tyburn hangings.

Just up the road on Petergate, between Bootham Bar and the Minster, is another York Brewery pub, the Three Legged Mare. This was the nickname of the gallows, peculiar to York, used at Tyburn to dispatch the condemned – equipment helpfully illustrated on the pub sign.

CYCLING LONDON TO YORK IN A DAY?

I asked Nigel, our Endurance Cycling correspondent, about the challenge of cycling Swift Nick’s route (the version from Barnet). Here’s what he had to say about tackling London to York in a day…

Nigel: In the world of Audax (long-distance) cycling, there’s actually a tradition of going on very long bike rides to York. Every Easter there’s a competitive team event called the ‘Easter Arrow’, in which groups of riders set off from all over England and cycle to York. The goal is to ride as far as you can in 24 hours.

When I did this in 2017 we set off from Cambridge and did a loop through Suffolk before turning north across the Fens to the Humber Bridge and York, and completed 415km in 23 hours (we didn’t win). The last event was in 2019 when the winning team cycled 492km, again in 24h.

How daunting is the challenge?

Even for me [as a middle-ranking Audaxer], I’d say that riding Barnet to York in a day is entirely feasible, and with a 6am start could be completed around midnight. Obviously a top Audax rider might take several hours less.

I think the key thing is that the distance is not long enough to require people to cycle through the night and face ‘the dozies’ (sleepiness) at about 4am. That’s a well-known challenge for a 400km ride (which takes me around 24 hours) but never for a 300km ride. It’s just a very long day’s ride.

If the route had been 400km I would be mentioning the problems of sleep-deprivation, which leads to lots of classic Audax activities like dozing in bus shelters. But with 320km that wouldn’t be an issue at all. Obviously you’ll be tired, but you won’t be falling asleep in the saddle.

However you would want to start early. If you’ve just conducted a robbery in Barnet at 4.30am or so then – in midsummer anyway – this would be a nice time to start as it would be getting light very soon. Cyclists can get used to the early starts by preceding the ride with several days of going to bed early and getting up early at ‘Audax o’clock’. Getting into the right ‘time zone’ is important.

The main thing about a 4.30am start (or similar) is that it’s not an overnight ride so there is less scope to use main roads, which are fairly empty in the small hours.

Could you do it carrying 560 guineas, Swift Nick’s alleged haul from his morning’s work?

Probably best to steal 560 guineas in Bitcoin as it will weigh less.

What route would you take? The Great North Road that Swift Nick used is now the A1 – pretty direct but horrible to cycle.

There’s a lot of flat countryside between Barnet and York, especially if you stay to the east and choose a route which takes you across the Cambridgeshire and Lincolnshire Fens: places like St Ives, Spalding and Sleaford. It’s only when you reach Lincoln (and the Lincolnshire Wolds) that you’ll have any climbing to do. But once past there it becomes pancake-flat again for the final section via Goole to York.

Taking that route (using mostly B-roads) works out at about 355km, which would take a moderate-paced Audaxer like me about 20 hours. A very long ride, but it’s a standard distance for someone riding the first day of a 600km Audax (where there’s traditionally a sleep stop at about the 350km point), and hundreds of people of all ages do such rides every year.