It’s best done on a sturdy bike (hybrid, MTB, gravel etc) as there are some mildly bumpy paths, which may be muddy in wet weather. It’s 95% traffic-free and flat.

Getting to the start is easy: follow the traffic-free cycle path alongside the river (signed as National Cycle Route 65) north from the centre of town. 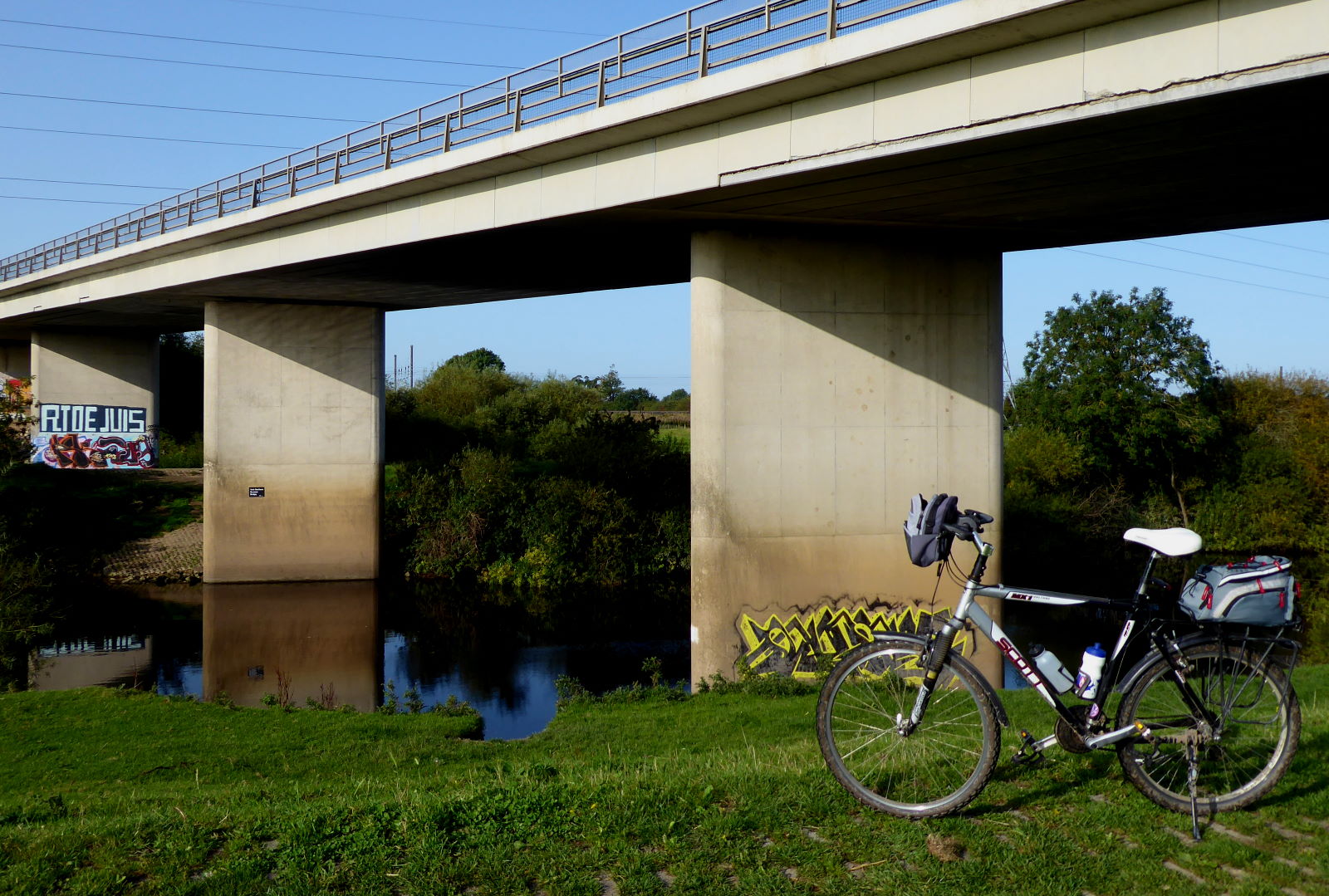 Start here, with a fine view of cows grazing down on the watermeadows below, as if painted by 17th-century master Aelbert Cuyp.

You’re on the Ring Road, aka the A1237, aka the York Northern Bypass Bridge (according to a plaque on the bridge itself) opened in 1986. Cuyp would no doubt paint the concrete in a lovely golden evening light.

Head down the east side of the river along the rather nice Sustrans cycle path, avoiding the cowpats. 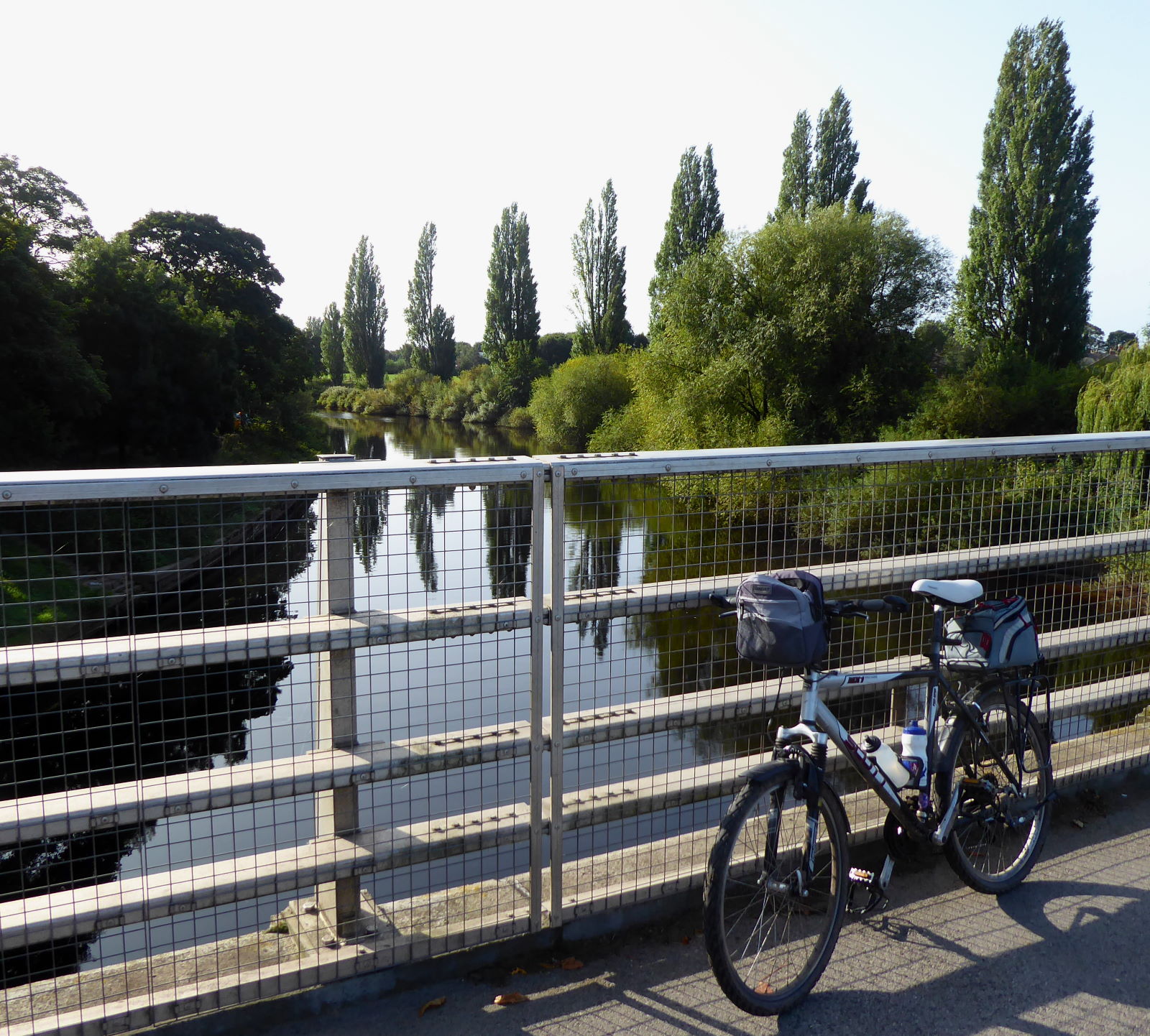 Built in 1963 on the site of an old ferry. Cross over to the west side and head along the top of the grassy flood bank to join the riverside tarmac path. You may see fours and eights out training on the water. If the river is in flood you may be joining them. 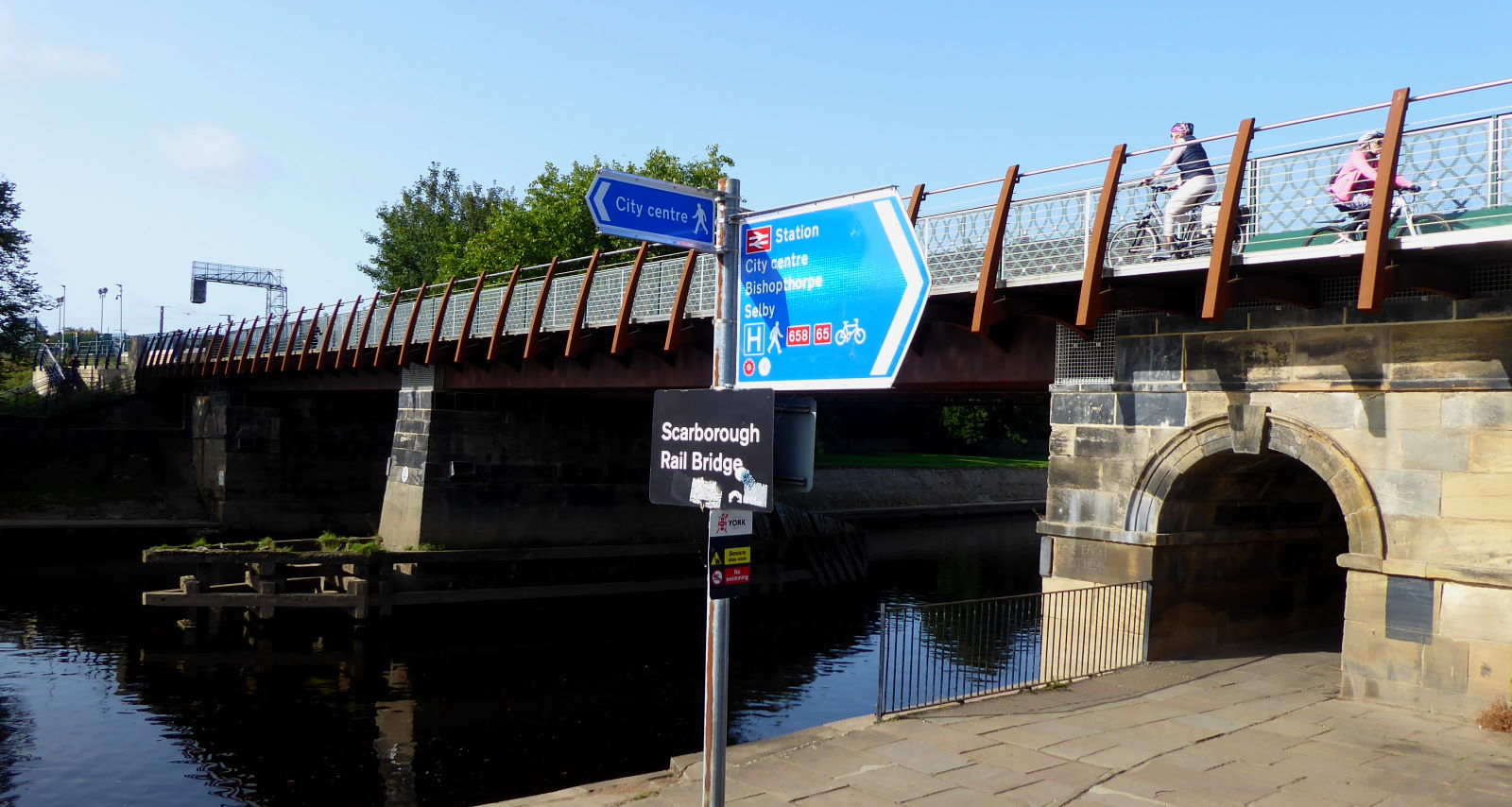 A gem of a pedestrian-cycle crossing alongside the railway bridge on the line to Scarborough. Opened in 2019 with newly level, wide, smooth access to the station, it replaced the previous narrow, clanky, awkwardly-staired one from 1844. Before that it was even worse: pedestrians had to walk in between the two rail lines.

Cross over to the riverside path on the east side and go through a picturesque gate. For the last bit, just before you turn left before the next bridge, dismount and push. 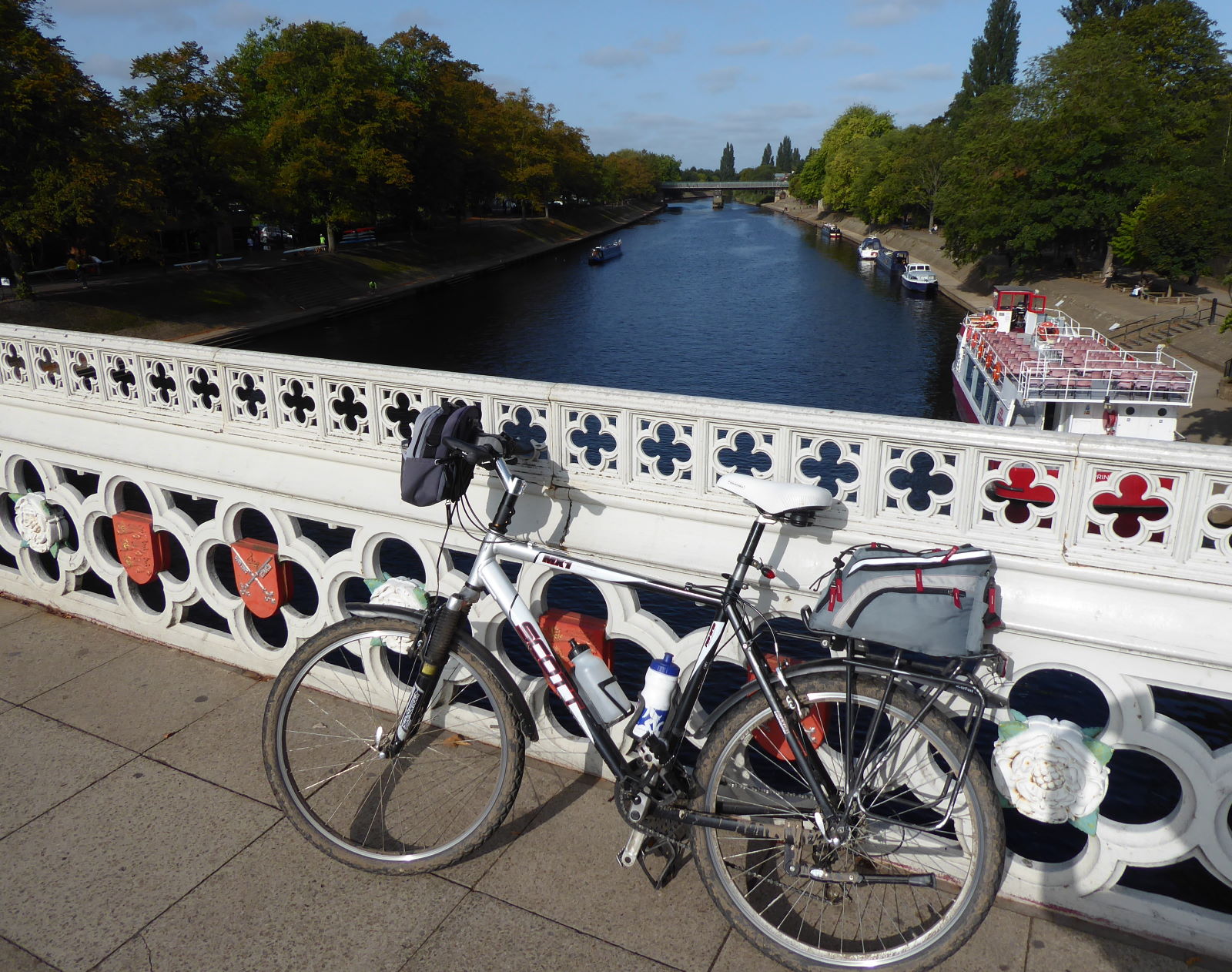 You’re right in the historic centre now, with a thrilling view of the city walls one way and the Minster the other. The bridge, from 1863, is on the site of an old rope ferry. It’s always busy with traffic and not very nice to cycle across.

Cross over the west side and follow the riverside road up to the traffic lights, where you turn left. There’s an advance green for cyclists, though many drivers and pedestrians are oblivious of this and will shout at you for ‘jumping the red light’. 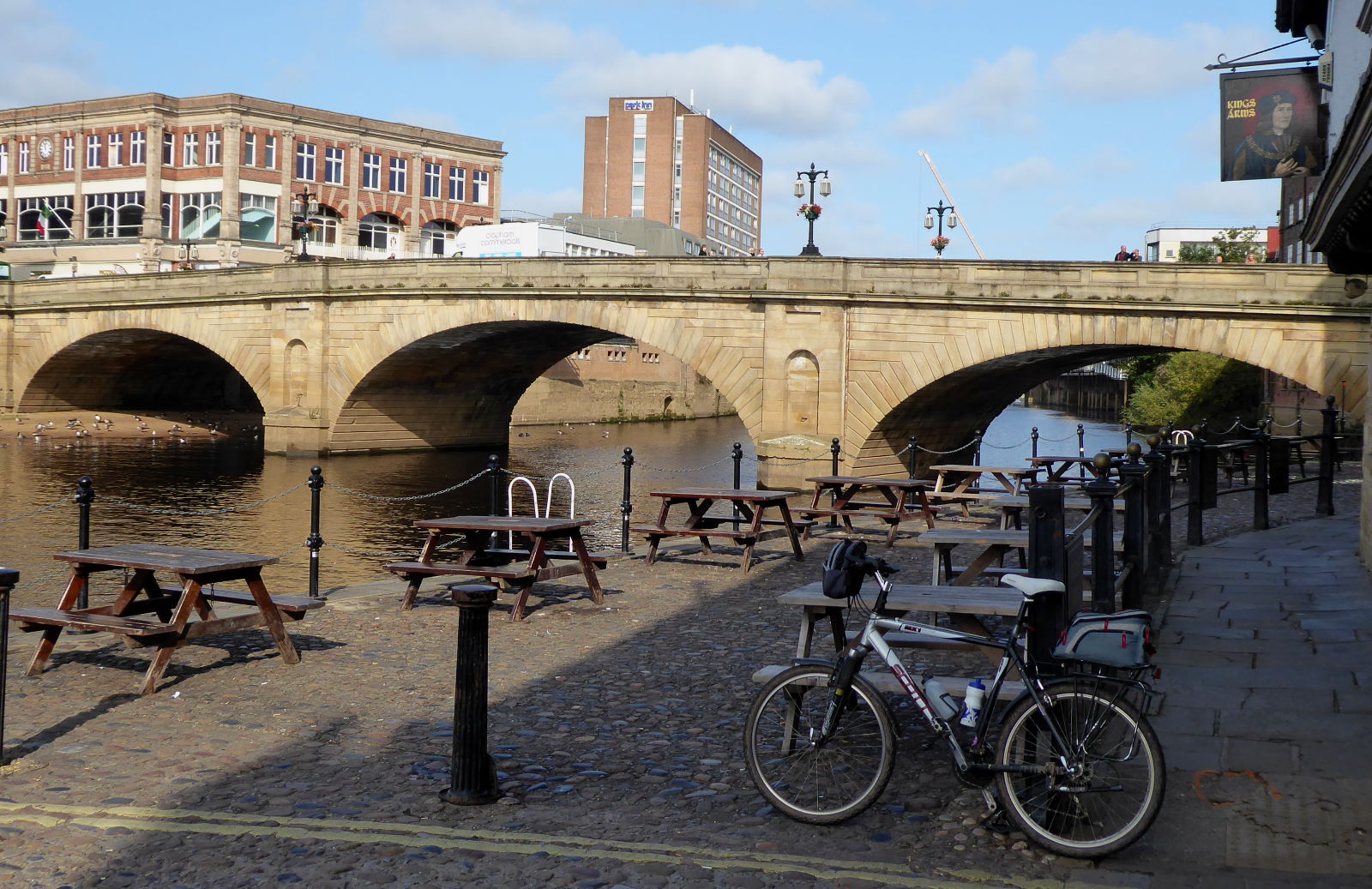 There have been bridges on or near this site since the Romans arrived and introduced civil engineering, rabbits, nettles, Latin, cabbage etc. This version dates from 1821. Looking south from it, you get fine views of the King’s Arms and its terrace, the pub that gets flooded whenever the Ouse rises.

Cross to the east side and lug your bike down the steps to the pub terrace. Carry on alongside the river past pleasure boats and restaurant/bar pavement tables. You are allowed refreshment, and the (perfectly pleasant) Sam Smith’s is the cheapest pint you’ll get outside a Wetherspoon. Just saying. Originally a toll bridge, finished in 1881. Tolls were scrapped on 1 Apr 1914, as a plaque joyously informs you. Anything that saves money is a cause for celebration in Yorkshire.

If you didn’t like the Sam Smith’s, there’s a Wetherspoon about 100m to the east of the bridge. Just saying.

Cross over to the west side and take the riverside path, Terry Avenue, past lovely Rowntree Park (which has a fine cafe-cum-library). Sadly Terry Ave will be closed for works through 2021. 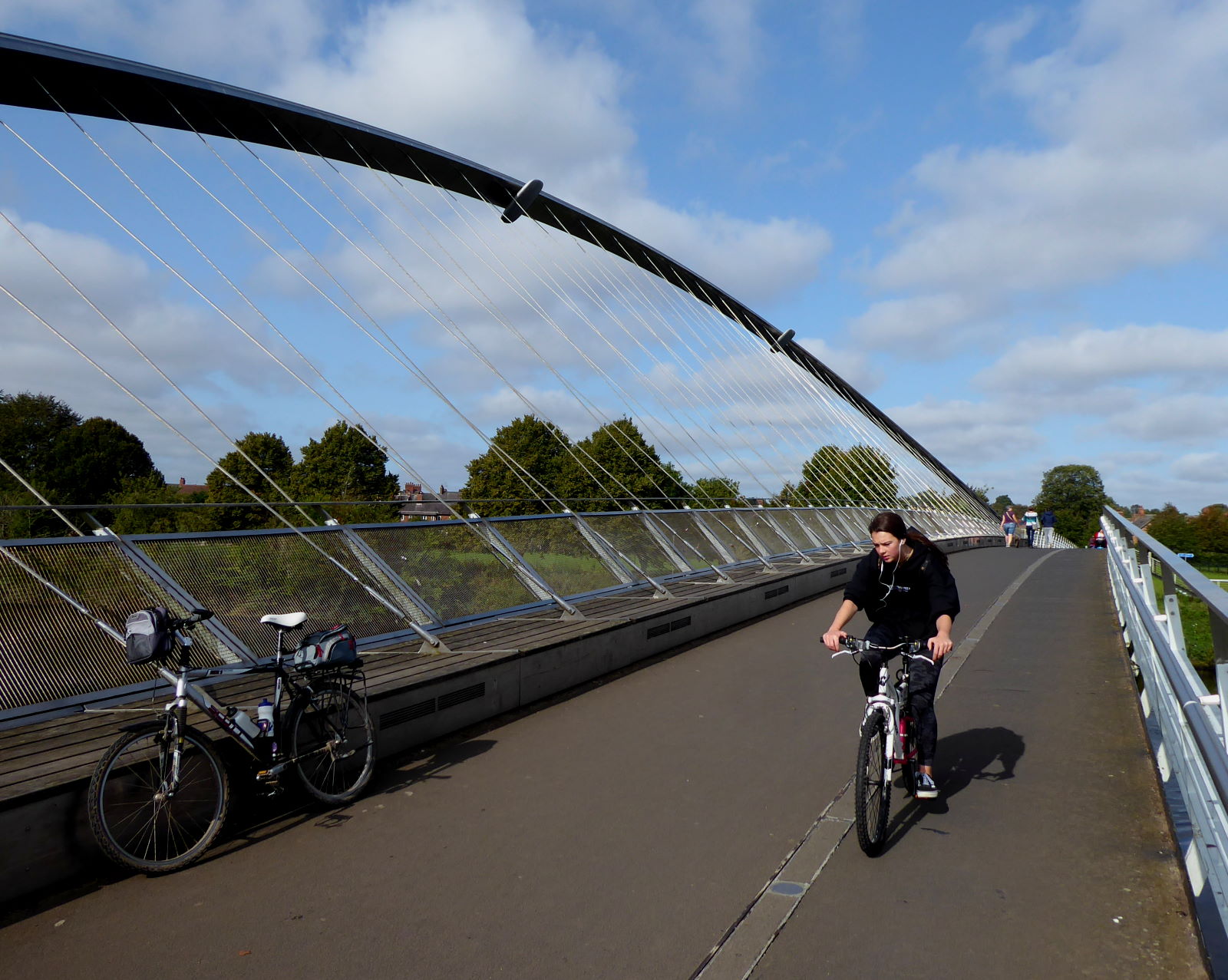 Opened in 2001, to the delight of pedants who maintain that, strictly, the new millennium started then. This one is the best of all York’s bridges, because it’s pedestrian-cycle only, but also more than a bridge. The shelf that runs all along one side (actually designed to box off cabling, not as seating) is ideal for sitting and picnicking, socialising, and watching the world go by.

As it does, with all manner of wheeled transport: bikes, tandems, handcycles, e-bikes, wheelchairs, buggies, recumbents, special-needs machines… it’s all rather uplifting. There’s also an ice-cream boat which you’ll see from your seat, which is thoroughly recommended, especially the rhubarb. (The Romans introduced that too.)

Cross over to the east side and turn right to follow the cycle path. When it gets to a residential road head straight across on to the chalky track. It goes past moored boats and turns into an unsurfaced riverside path. Carry on to the picnic tables, and shortly after, turn right through the barrier to keep following the riverside path. 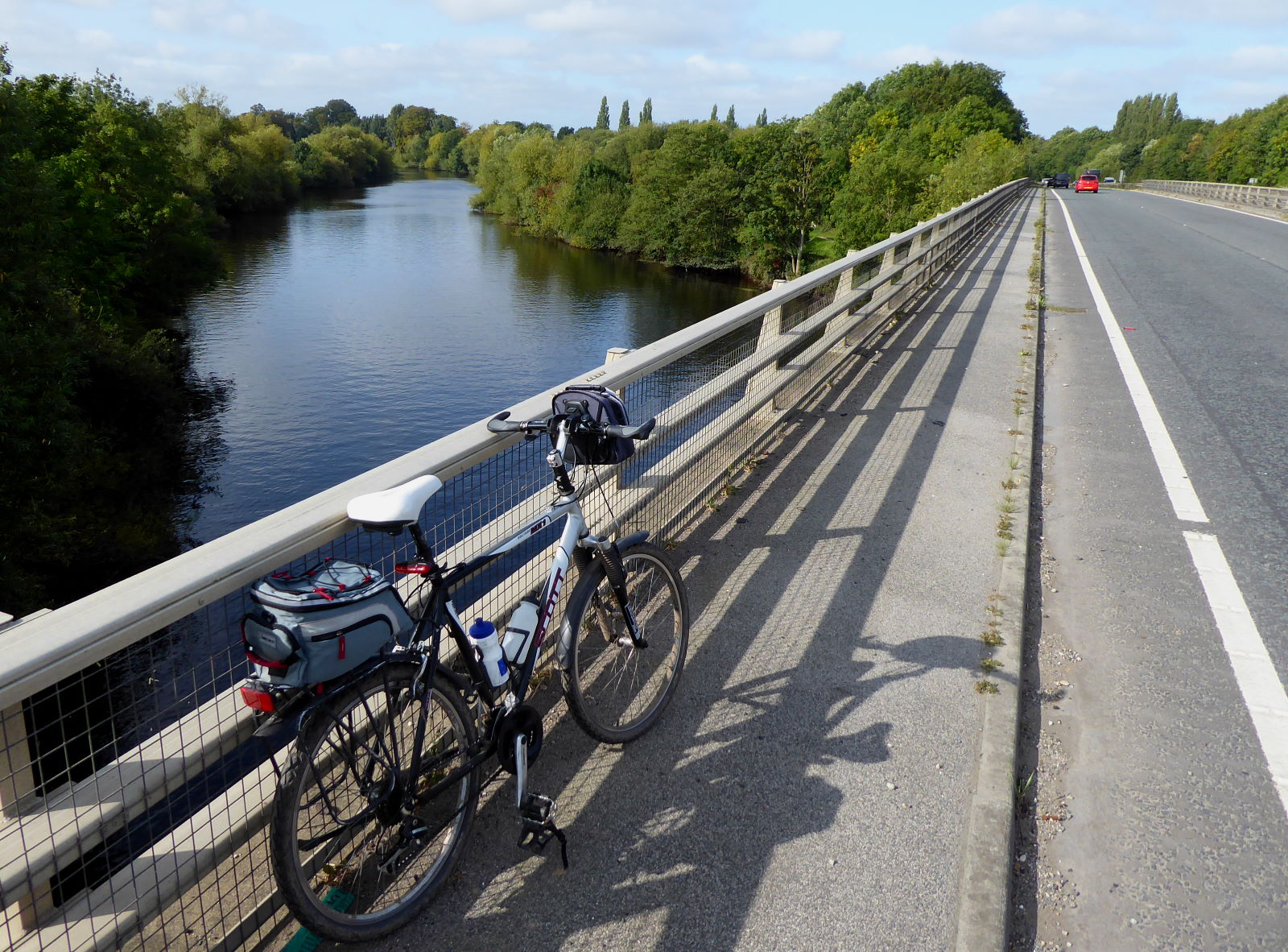 An awkward one, this. The A64 is a fast dual carriageway that forms York’s southern bypass and it’s hard to see why anyone would want to cycle it. Unless they were doing a bridges gig, of course.

Fortunately it’s perfectly safe and doable for our purposes. Ish. Duck under the bridge, a concrete giant from 1976, and immediately lug your bike up the slope to road level. Haul it over the crash barrier. There’s a footpath by the side of the road for just the bridge section, so you can cyc— er, I mean, wheel it along here to the other side, unmolested by lorries.

Cross to the west side. Immediately after the river, there’s a short set of wooden steps to the left. Wrestle your bike over the crash barrier and down the steps. Follow the riverside path, which will take you off the river and alongside Bishopthorpe Palace, where the Archbish of York lives. On the road, turn left. At the next proper junction, turn left to keep parallel to the river along that road. After a while you’ll see a road bridge crossing above the road, and cyclepath signs pointing you off to the left. Go up here and turn left onto the cycle path. 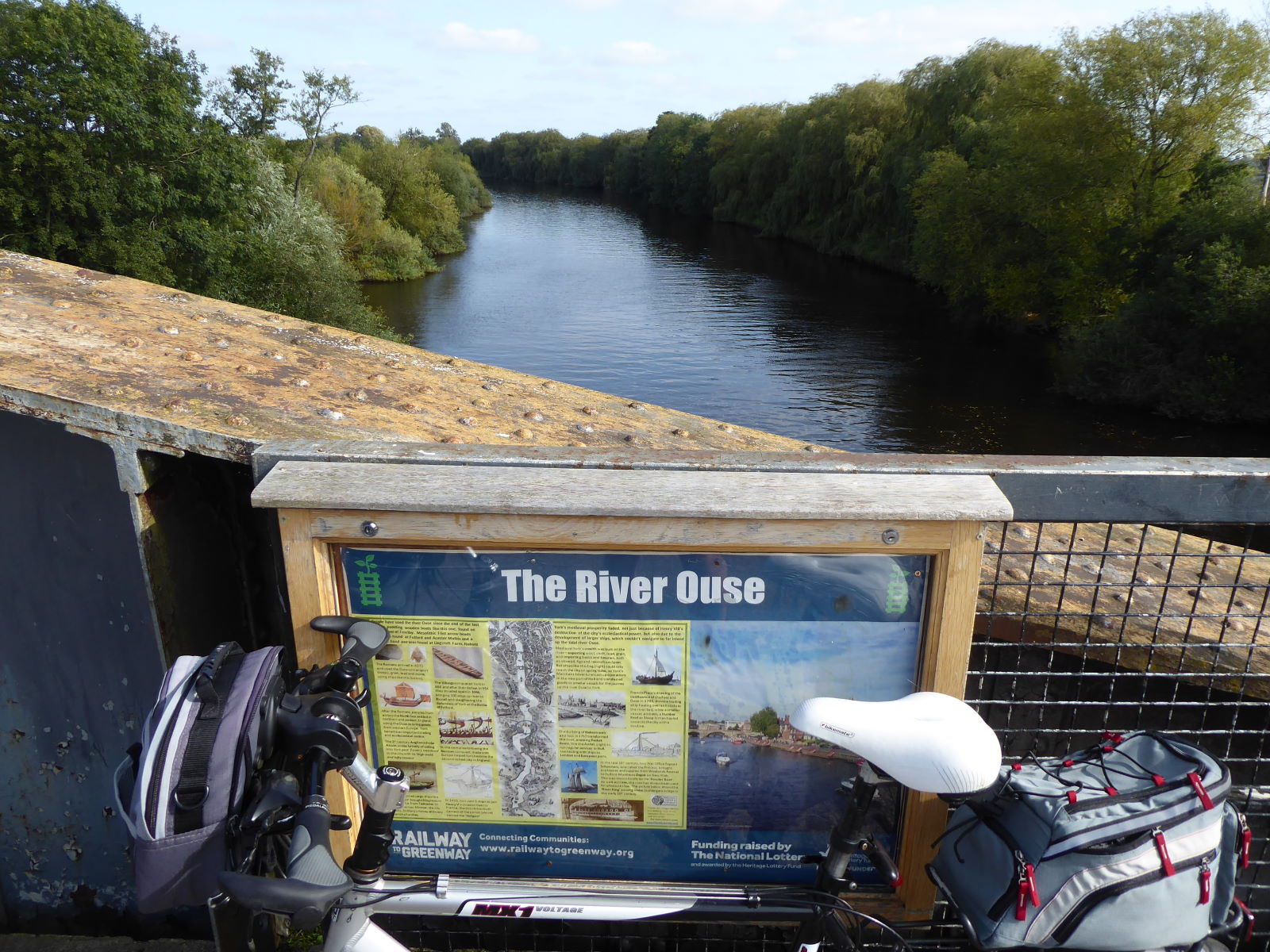 After a few yards you’re at journey’s end: Naburn Bridge. You’re on one of England’s best railtrails, running from York to Selby along the old East Coast Main Line. It was closed because of mining subsidence and turned into a cycle path in 1983.

A delightful feature is the scale model of the Solar System, with the Sun not far from a Tesco Extra, and Pluto in the village of Riccal outside Selby. Naburn is home to the Saturn model, rings and all.

And an equally delightful feature of the bridge is the enormous wire sculpture, called Fisher of Dreams. A man has just caught a train, which is actually Mallard, which hurtled past this spot on its way to breaking the steam speed record in 1938. Behind him is his bike, which is being territorially marked by a dog.

To get back to York centre, simply turn round and follow the path. Blue cycle route signs will guide you car-free all the way back to the Millennium Bridge (about 4 miles) through pleasant scenery including Knavesmire Racecourse.