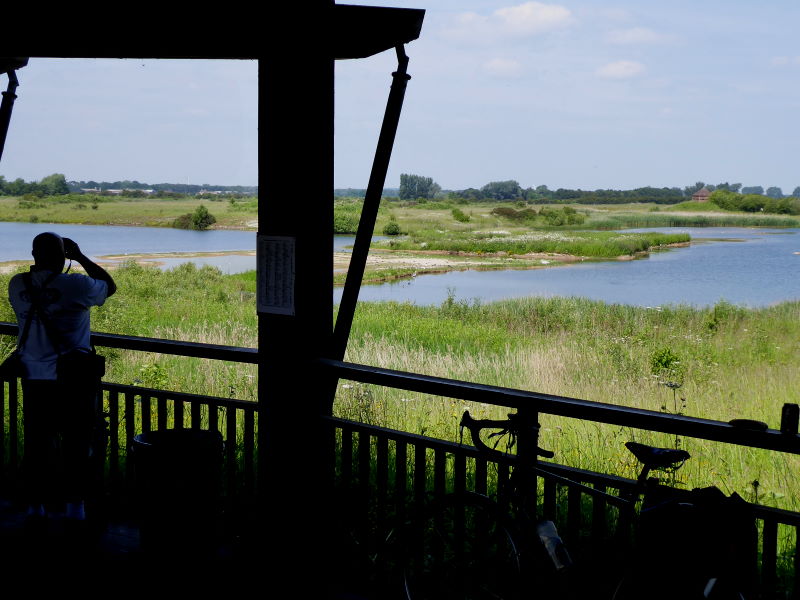 Most weeks I cycle from York to my mum’s, outside Hull. At just the right point for a refreshment stop, about three-quarters of the way, is North Cave Wetlands: a quarry being turned into a 21st-century nature reserve.

It has lakes, well-appointed hides, oodles of exotic birds, and perhaps most important, a snack van offering everything from chilled cans of fizzy drink to locally sourced venison burgers. And all for free. (Well, not the burgers or drinks, obviously.)

It’s all fairly recent, developed over the last decade or two, and significantly over the last couple of years. Further expansion and improvement is planned.

I remember when this was the pits. Some of it still is, worked by the Breedon Group for the extraction of sand and gravel.

At the western edge of the reserve you have to watch out for lorries: it’s not a good idea to get too sidetracked by the resemblance of sand and spoil heaps to northern Chile or Mars.

I spent a very happy hour mismatching birds I saw through my binoculars with the ones on the information boards. I think I saw an avocet, bringing my total of Interesting Birds spotted this year to 1.

Others are a bit more confident what they’ve seen, and it’s an impressive list for the birder. In the couple of days either side of my visit, on one website people logged drake common scoters, green sandpipers, corn bunting, drake wigeon, marsh harrier, ringed plover, yellow wagtail, snipe and many more – even an otter.

I headed west along the reserve’s chalky track to the grand hexagonal hide at the end, then struck south along the bridleway – when I could see between dustclouds churned up by passing lorries – and down to yet more old gravel pits turned into lakes.

There’s a diving school (yup, ‘diving’, not ‘driving’) down here, where the bridleway cuts east and conducted me back to my customary York-to-mum route. A mighty lunch and glass of crisp white wine was now only a short hop away.

I just love stopping here. North Cave Wetlands is a gravel bike ride delight, whether or not you’re actually on a gravel bike.

Listen to my piece for classical guitar, written in 2021. It was inspired by the memories of this day’s ride. (MP3, 6min 13sec). You can hear it playing along with the score at my YouTube North Cave page.