And finally, a pleasant surprise: a bike exhibition we stumbled on, Turning Wheels: Bicycle and Daily Life in Taiwan. 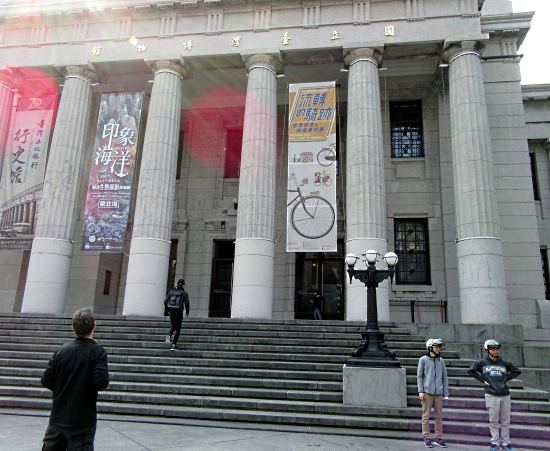 It was at the National Museum of Taiwan, which is deceptively spacious. Because from the outside (pic) it looks spacious. But inside… well, I’ve been to bigger Wetherspoons.

Still, of the handful of galleries, two were devoted to bikes, so that’s a Yes from me. 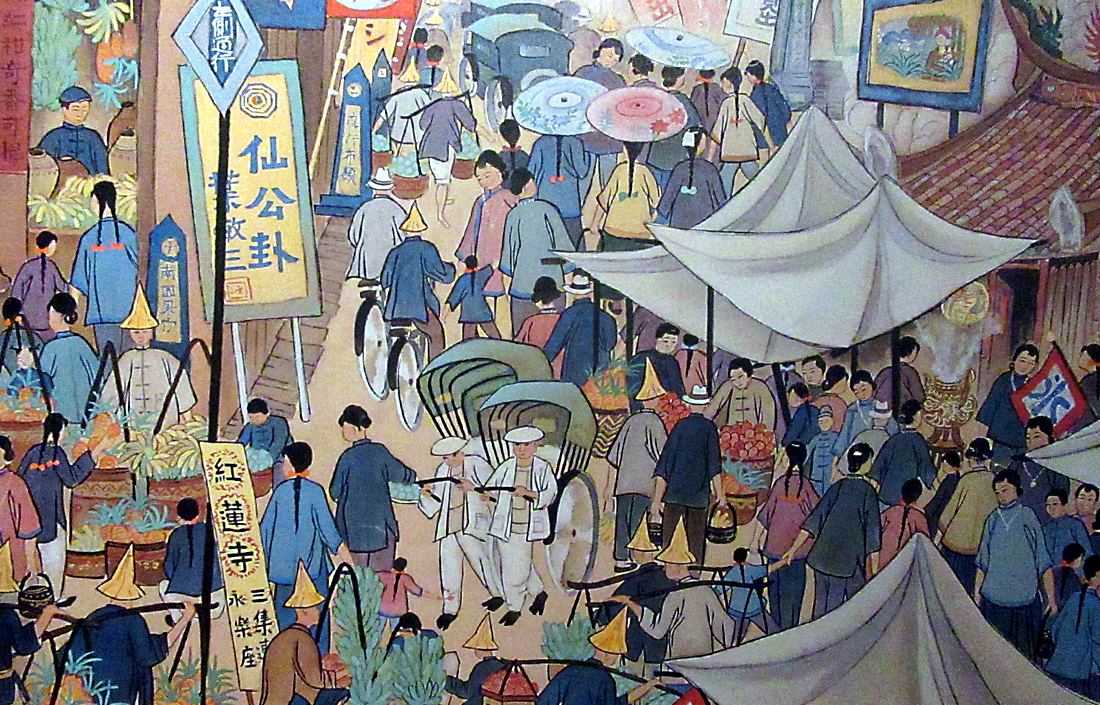 As well as lots of bikes, many of them even older than my MTB at home, there was this 1930s print (detail, pic) showing everyday life in a Taiwanese street. Apparently doctors and midwives were prominent users of bikes then – the docs on chauffered tricycle rickshaws, the midwives on upright town bikes. Let’s hope there weren’t too many emergencies. Response times in these crowds might have been slow. I was intrigued by this pottery figure of the 1930s too (pic), which clearly contravenes the Road Traffic Act 1988 Section 24.1 (“Not more than one person may be carried on a road on a bicycle not propelled by mechanical power unless it is constructed or adapted for the carriage of more than one person”). 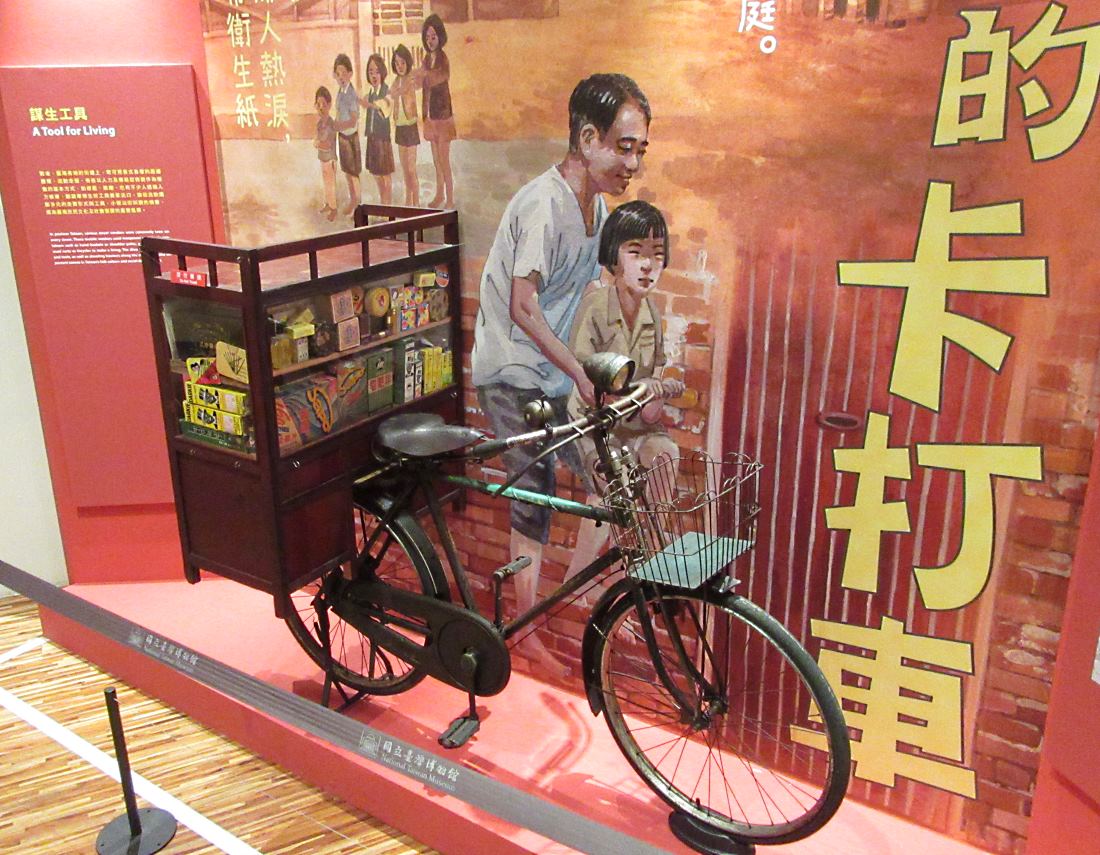 Many people started small businesses from their bike after World War II. This sort of thing – a micro-shop on wheels – was common, and helped ordinary people survive in a shattered economy where job opportunities were few, and when small-island life could no longer rely on trading links with the continent. So you see, it’s not all bad news for Britain post-Brexit. 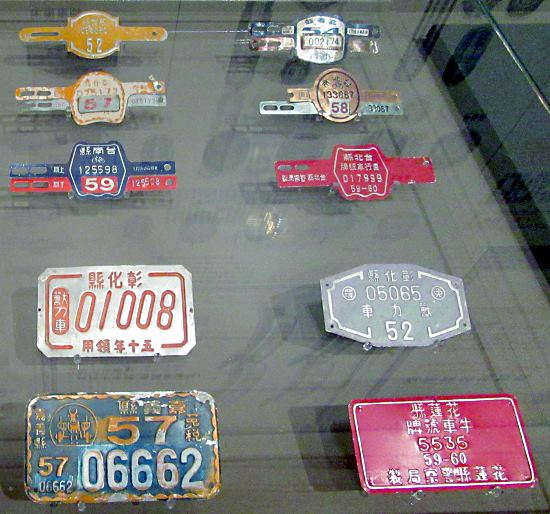 Bicycles were licensed in Taiwan from 1945, along with other human- and animal-powered vehicles such as rickshaws and ox-carts, and some of the plates were on display (pic).

However, it evidently didn’t prove any use in tracing stolen bikes or raising revenue, and licences were abolished in 1973. And you can now cycle on the pavement anywhere you like in Taipei, and nobody minds and it all works out fine. So take that, anti-cycling columnists!
Now, in England, thick shouty people write about stuff like this to local newspapers, but evidently not in Taiwan. Perhaps it’s because they use old complicated forms of the Chinese characters, which stops the thickies from corresponding. Perhaps there’s a lot to be said for insanely complex ideographic systems. The exhibition was quite big on special-needs bikes, whose users thrive here thanks to pavement-cycling being OK, and many roads having big wide cycle lanes. Here’s a hand cycle (pic). 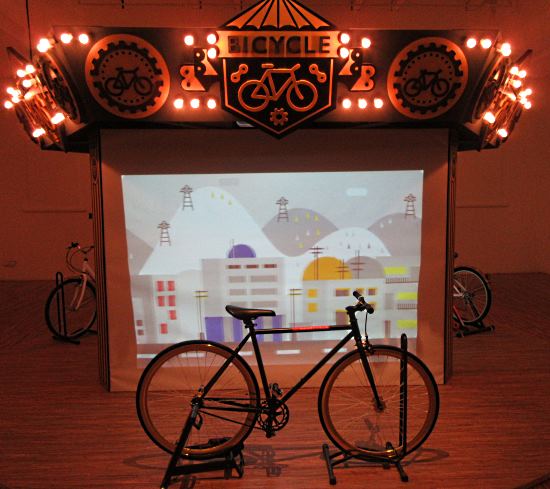 One of the displays (pic) invited you to ride a bike on rollers (one of three, set to different heights – in Asian scale, short to tall, or in Dutch scale, short to short).

The background was supposed to move faster or do something interesting and interactive, but in fact, however much effort you put in, nothing seemed to change. Maybe it’s meant to be a metaphor for cycle campaigning. 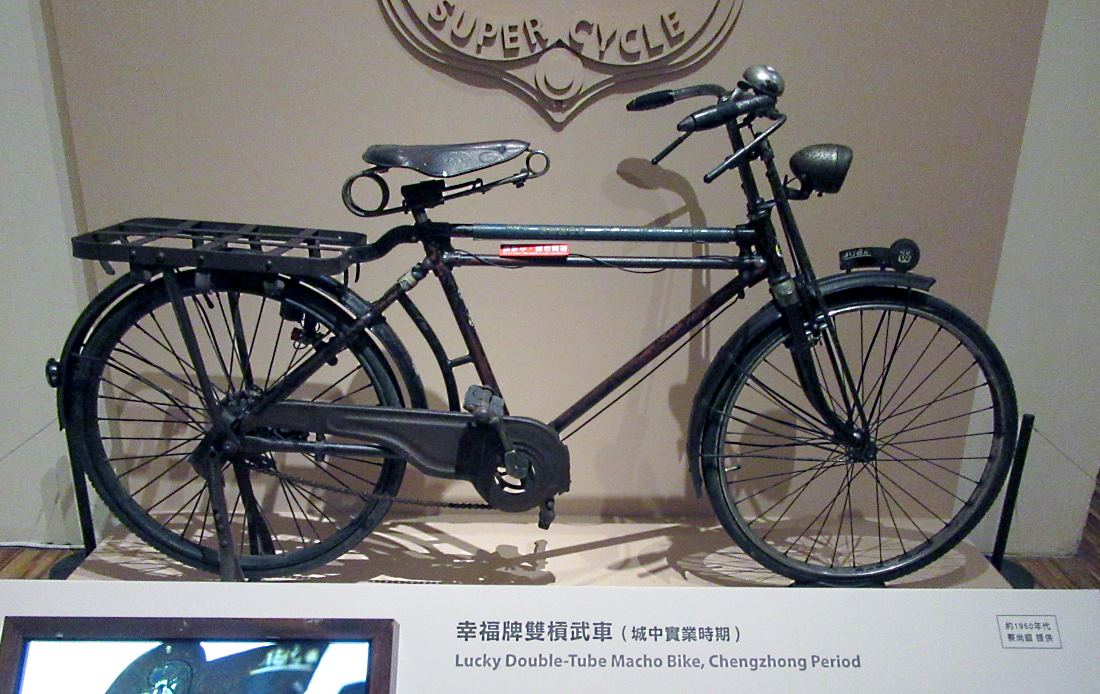 A reassuring aspect to the exhibition was that all the bikes that had propelled Taiwanese through the 20th and 21st centuries were proper bikes, with mudguards, racks, lights and chain cases. This is a Lucky Double-Tube Macho Bike, which was built for big loads – as much as ‘several hundred kilograms’ apparently. Sounds like my sort of bike, especially for a trip to Tesco at marking-down time.

Our time in Taiwan has been super: lovely people, lovely scenery (and some relentlessly dreary towns), epic street food (and some prawns that fought back), a country with a strong sense of identity and ease with its place in the world, and some quite delightful, pleasant cycling. I’ve just seen Tim on to the airport bus, and I leave for the Philippines tomorrow. And you know what? I think I’ll be back one day. To ride the island again. Maybe a bit slower next time. Happy cycling, everyone.