I pedalled up from my bargain Premier Inn room to meet Jack – who was riding with me for the day – at his house on the edge of Abergavenny. We picked some apples from his orchard to take with us and scooted along the back lanes up to Gospel Pass, Wales’s highest road at 549m. 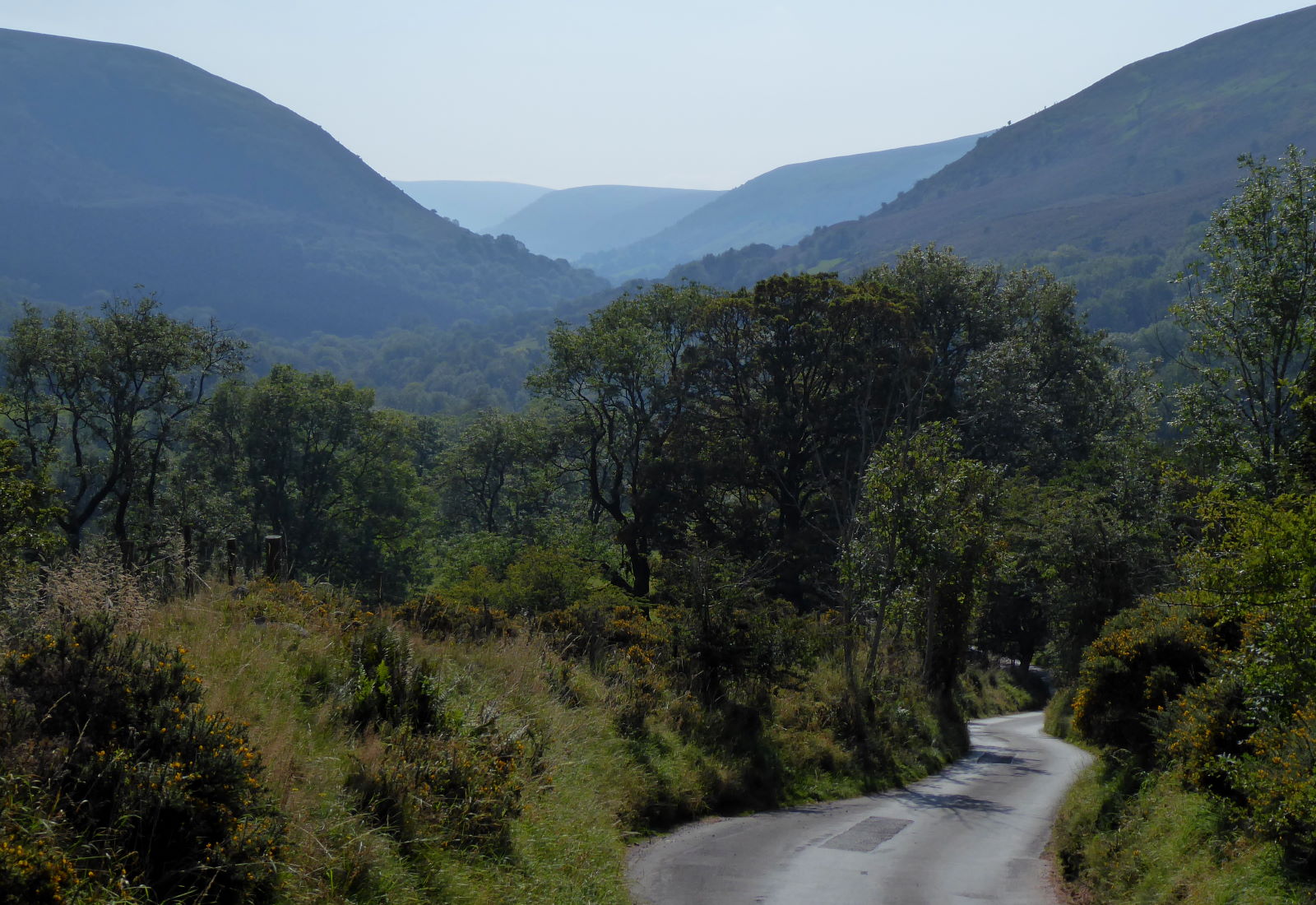 His progress was quicker than mine up the long, gradual, scenic ascent (pic). Partly this was because he was travelling lighter. He had a saddlebag with two apples and a choc bar in it, while I had two panniers full of a week’s touring essentials.

Essentials such as four changes of clothes, laptop, phone, camera, chargers, maps, cheese, salami, Aldi jelly babies, Lidl jaffa cakes etc, and mice (only computer ones, I hoped, but given all that food in there, I wouldn’t rule out real ones).

His progress was quicker than mine mainly, though, because I’m slower than everyone else. 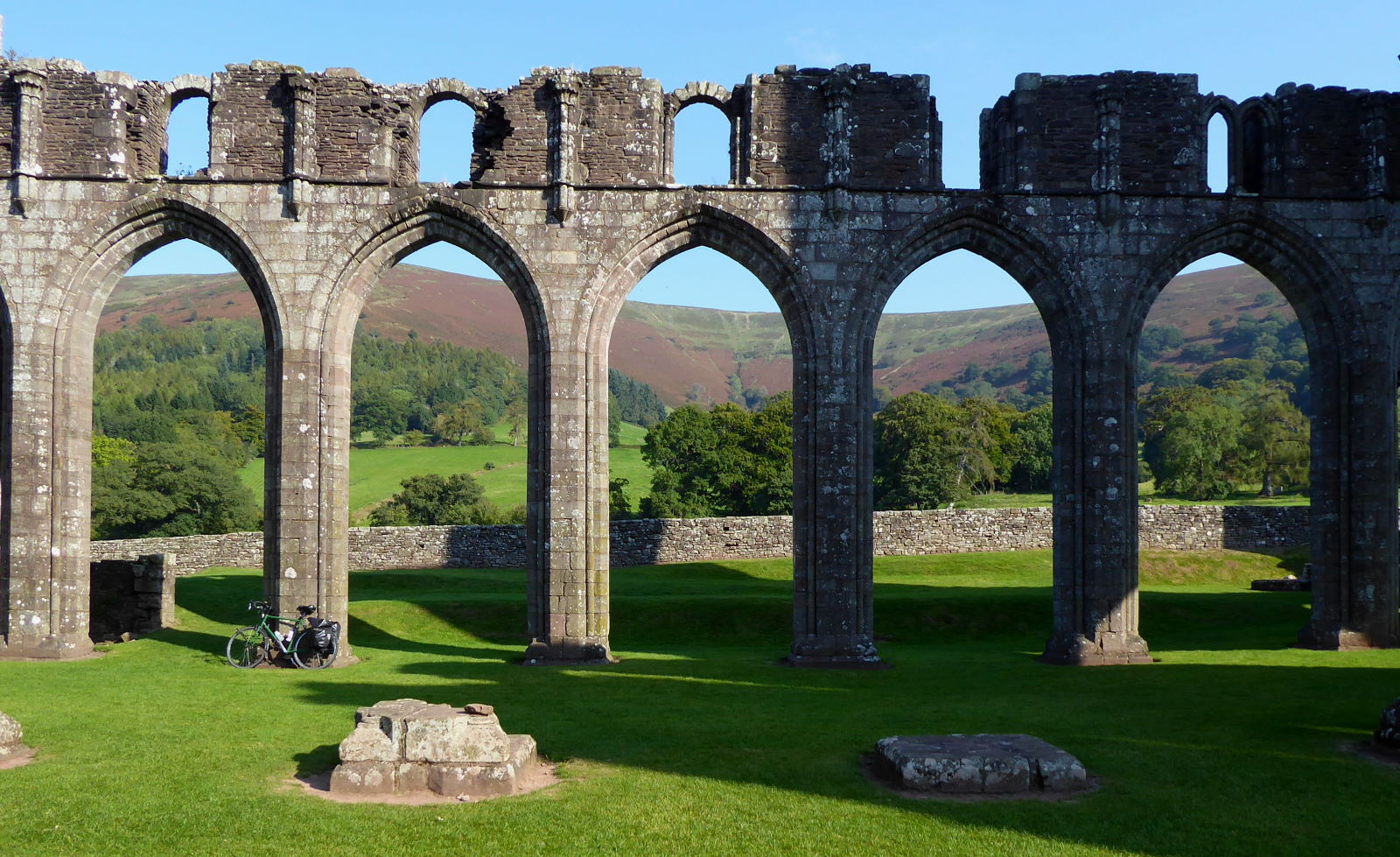 We stopped off at Llanthony Priory (pic), which fell into ruin centuries ago, as did the pronunciation of the original Welsh place name once the English got hold of it. 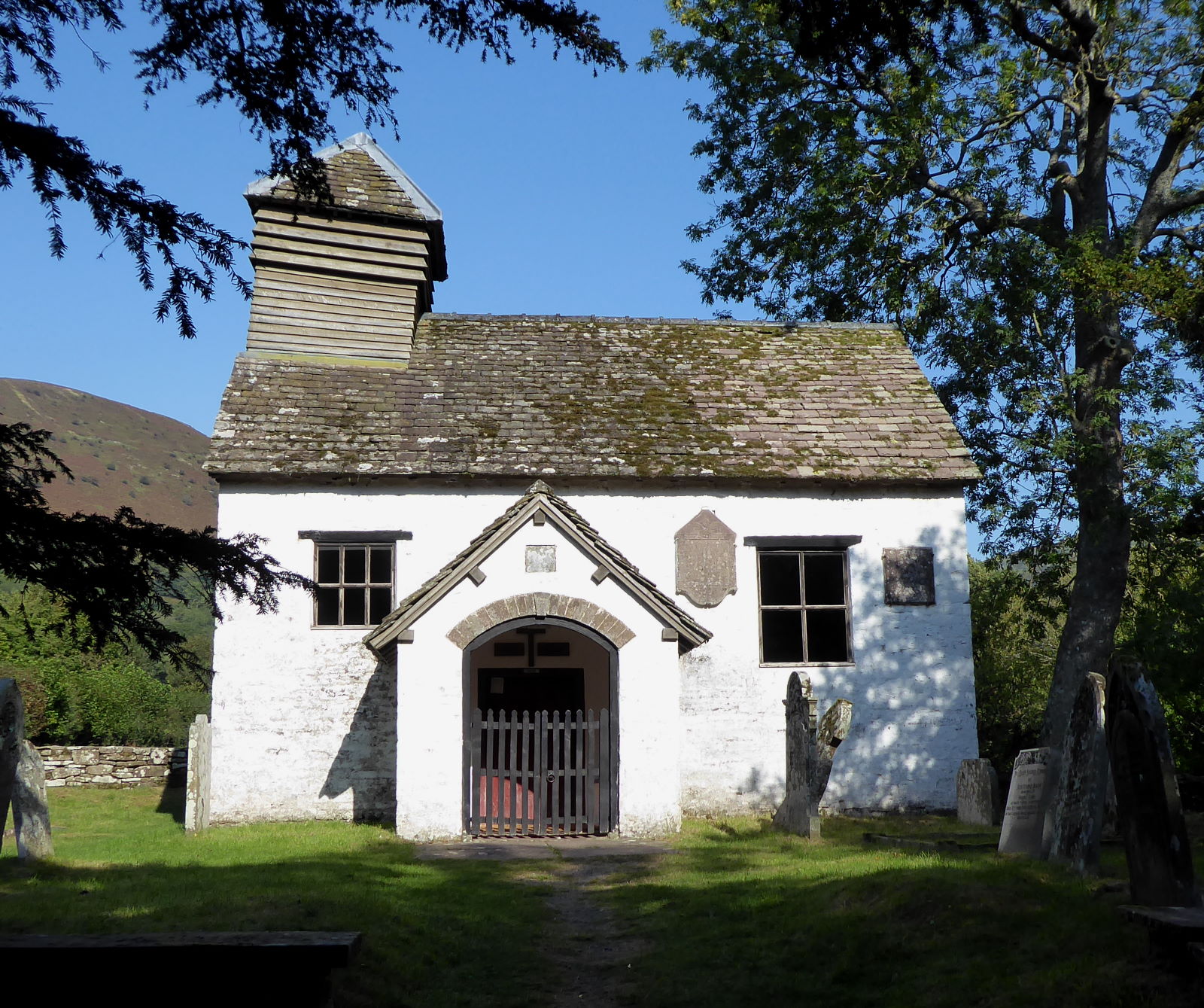 Another place to nose around was Capel y Ffin (pic), near the summit. The tiny, remote church’s intimate interior was charming, and featured an icon that mixed fourth- and twentieth-century imagery. Welsh Orthodox, I suppose. 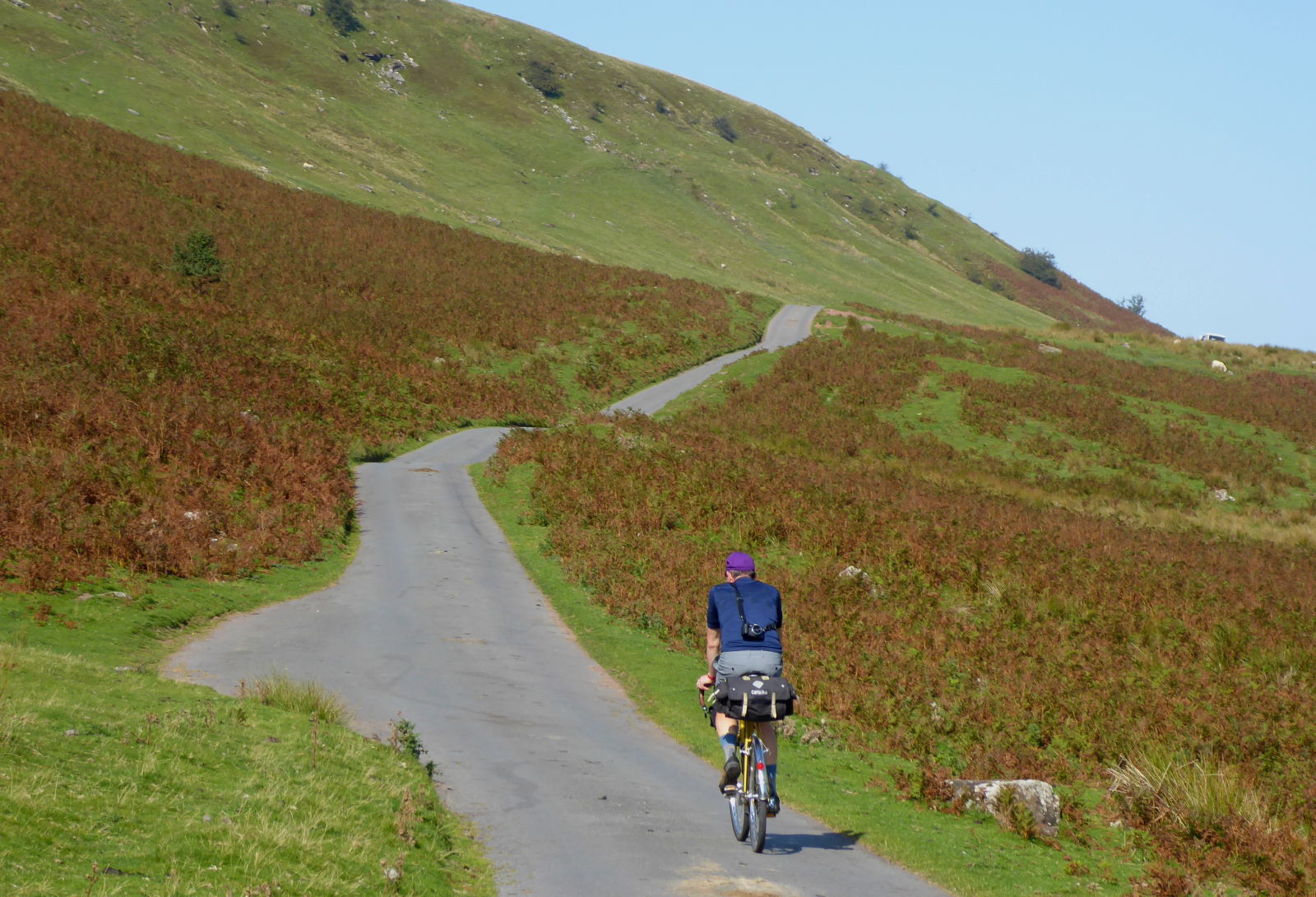 At the top the scenery suddenly opened out from woodsy greenery into moorland (pic), after which a rather impressive panorama of the Radnorshire Hills abruptly appeared before us. 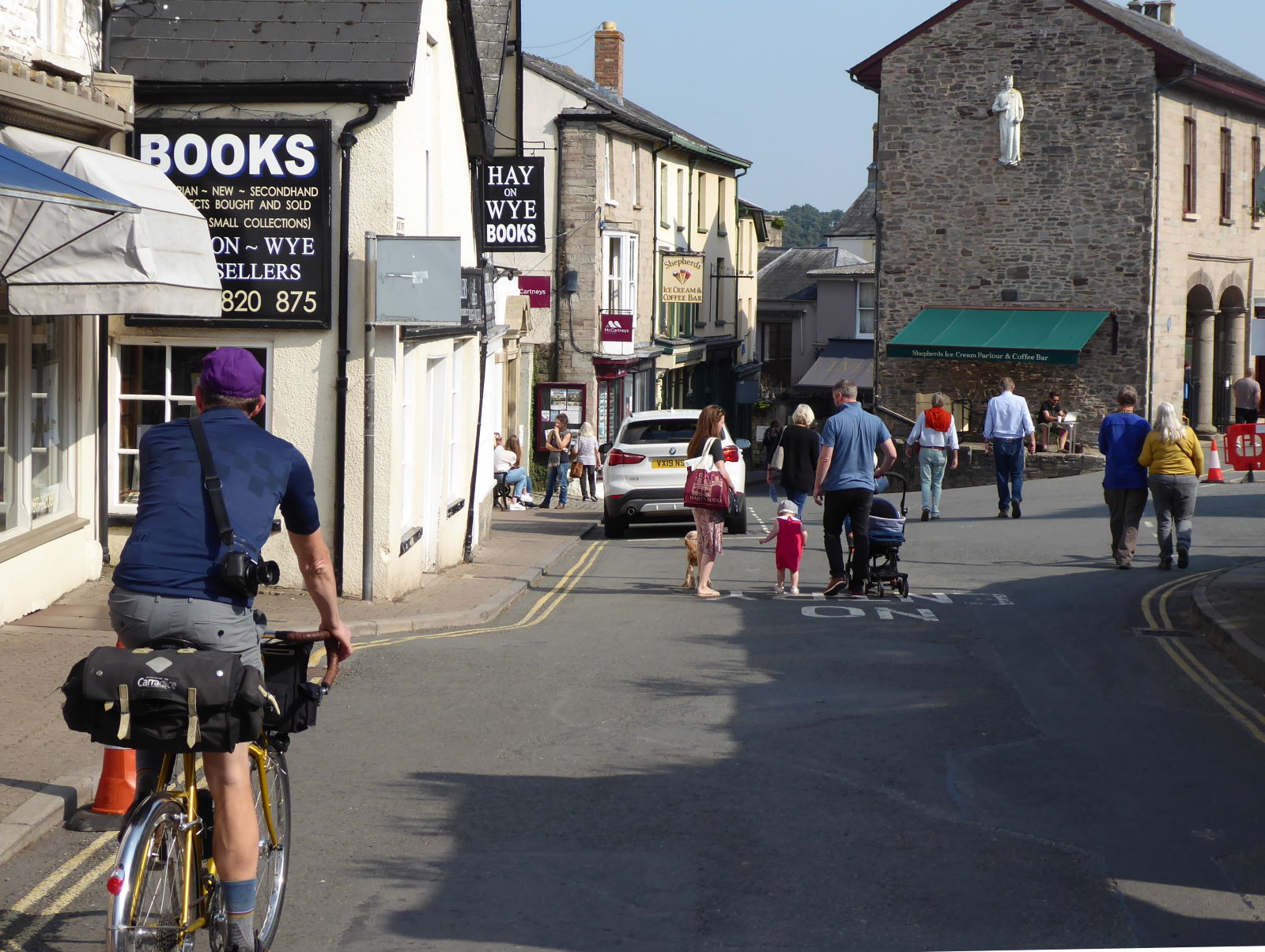 It was one long whoosh downhill to Hay (pic), which seemed to consist entirely of bookshops, delis and cafes – a rather agreeable state of affairs.

We stocked up on pricey but tasty local cheeses and pork pies for a picnic lunch which we enjoyed on a hilltop beyond Clyro, over the river.
Jack and I are both very experienced cycle tourists and writers, so you wouldn’t catch us going short of water. Well, not unless you’d been on that hilltop. Luckily we found a hidden tap in the churchyard in Bryngwyn just beyond. 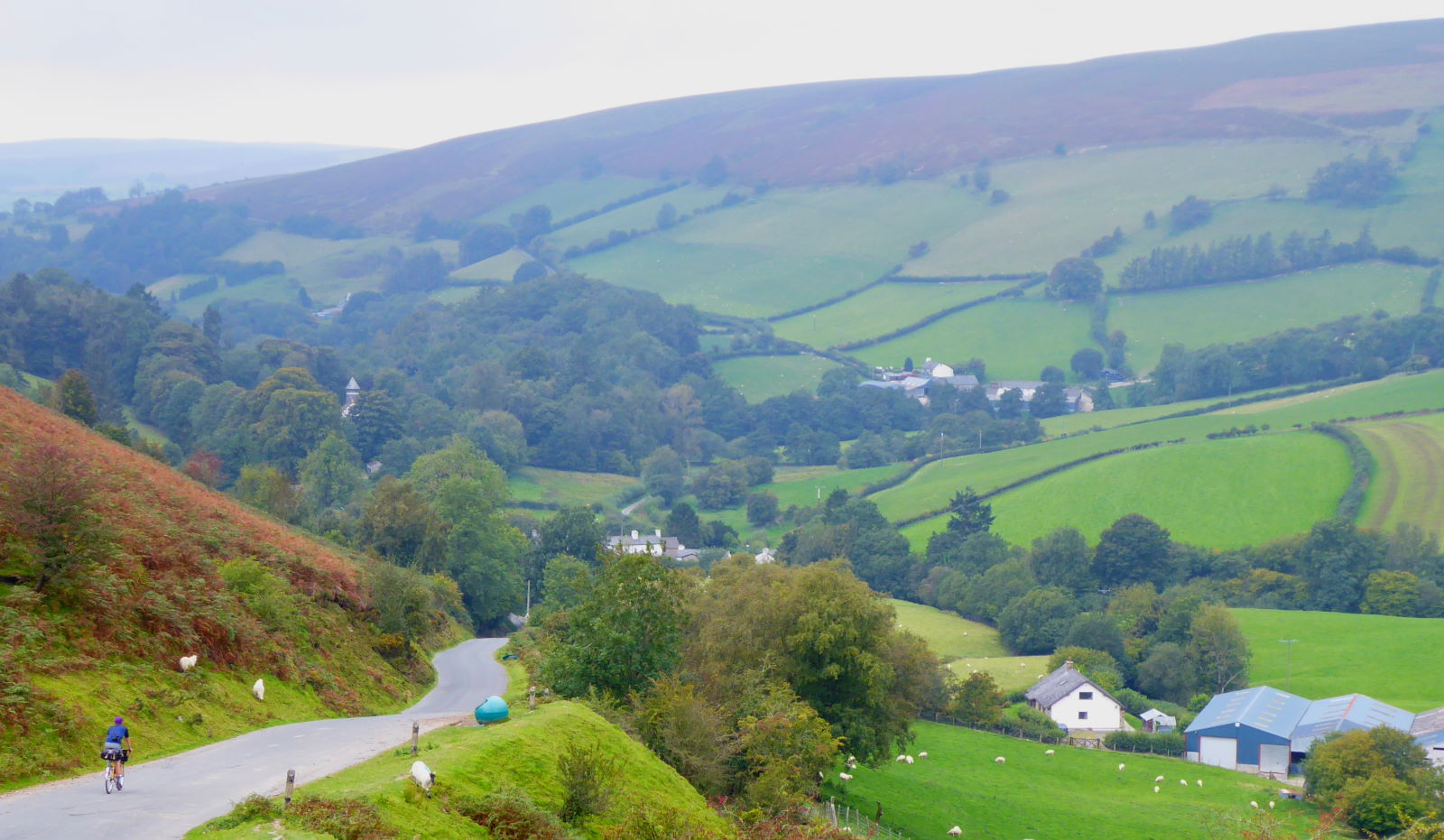 Somewhere around Hundred House we parted company, with Jack heading back home to his family, and me carrying on over the final moorland climb (pic) to Llandrindod Wells, where I had a night booked in a room above a pub… 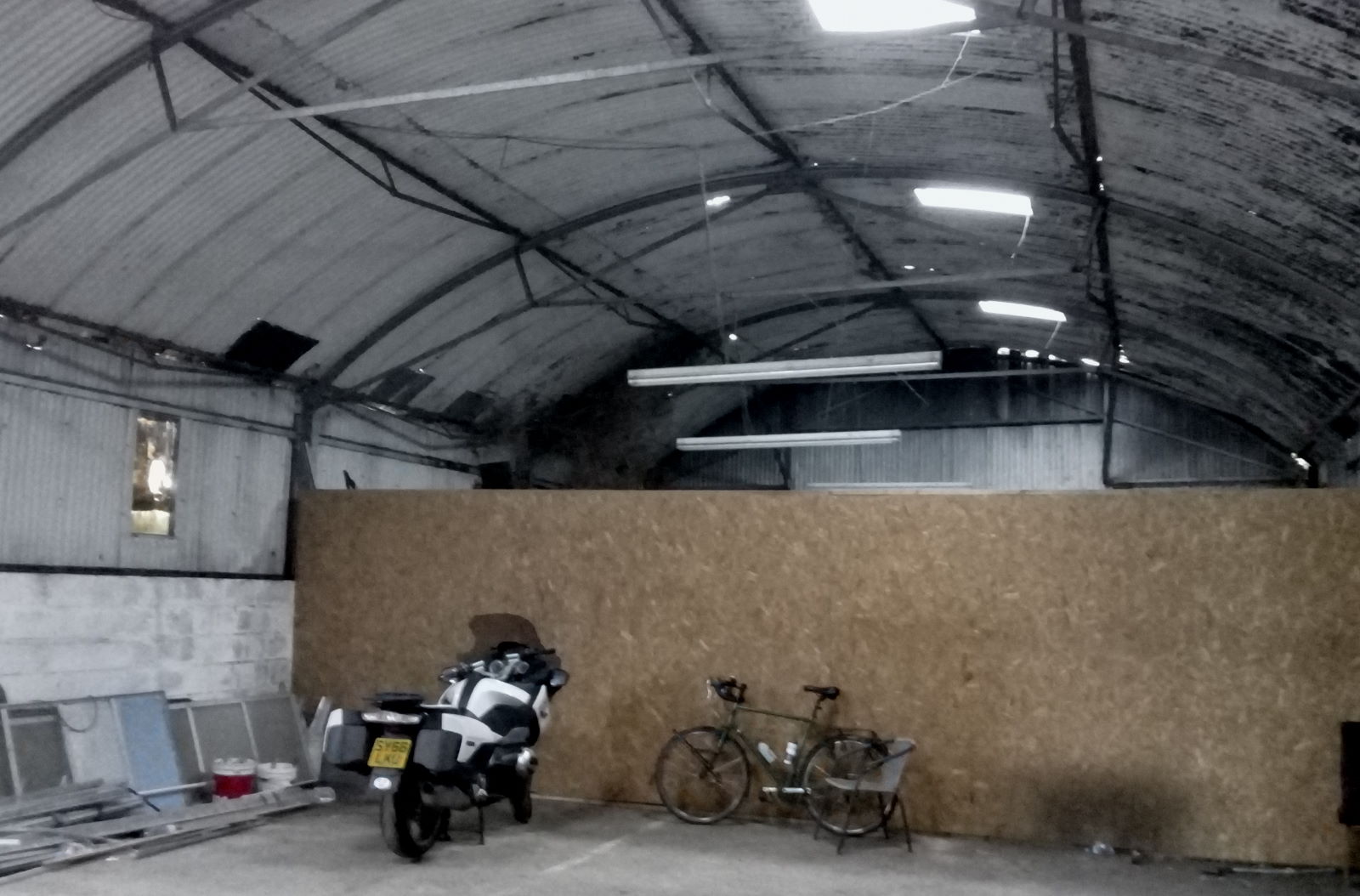 …and where my bike spent the night in the biggest bike shed I’ve ever seen. It was the size of an aircraft hangar.