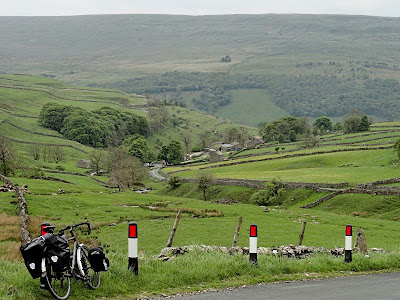 A sociable day of beautiful but hilly stuff in and around Wharfedale (picture). I was relieved I’d put new brake blocks on back in Penrith. 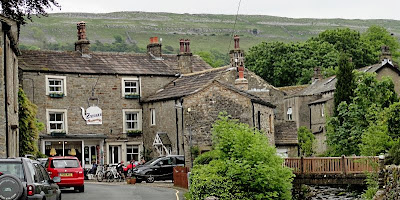 Much of the cycling was an uphill struggle. The socialising in cafes (picture, Kettlewell) certainly wasn’t. In fact, a combination of pushing up 1 in 5s, stopping constantly to take photos, and chatting amiably to fellow cyclists over coffee, resulted in my taking nine hours to do 45 miles. 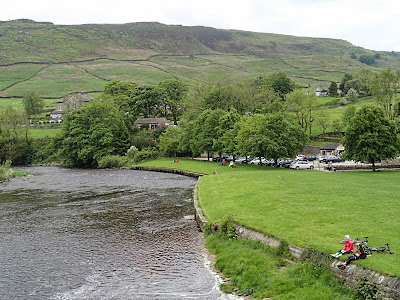 There were cyclists everywhere on the lanes and roads, most out on a club-run, but many on a more leisurely basis (picture, Burnsall). Evidence of the forthcoming Tour de France was everywhere too: not only those yellow bikes, but also signs for temporary (and lucrative) TdF camping at every farm field. Where will they put all the sheep that weekend? 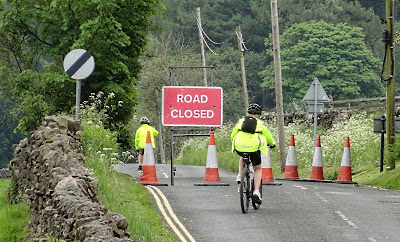 Another TdF giveaway was the resurfacing work being done all over the place. Three parts of my route were closed to traffic for the tar’n’chippings gangs, but of course as cyclists we could go through (picture). I was stopped and asked three times by cars if I thought they’d be able to get through. Each time I said No, it really is blocked, you’ve no chance. And each time the drivers said Well, I’ll think I’ll risk it anyway. 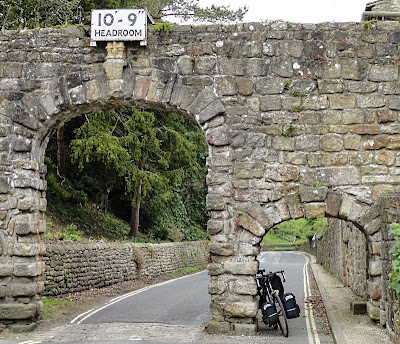 After Bolton Abbey, where there is this entertainingly low arch for cyclists to duck under (picture), I headed for Harrogate, and had the first proper dinner in two weeks, thanks to Vicky and Pete.